The Fogbow has reported that the Federal Elections Commission has opened an investigation into Orly Taitz’s unsuccessful 2012 campaign to replace Dianne Feinstein as Senator from the largest state in the union. Taitz finished a distant 5th in a large field in the California June primary, which whittled down the field to Feinstein and Elizabeth Emken. The incumbent Sen. Feinstein easily defeated Emken in November.

The investigation seems to have been triggered by a donation of the maximum of $2500 that was listed as coming from the wife of a Chicago doctor. Quoting Foggy in the post at the Fogbow:

Sylvia Astrida Doucette-Ladien, of Chicago, Illinois, and her husband, Dr. Kimball Ladien, a psychiatrist in Lakeview, both gave political donations of $2,500 each, in the form of “in kind advertising,” to Orly Taitz during her run for the U.S. Senate earlier this year.…

Taitz’s finances for her campaign have been questioned before by commenters at the Fogbow. She has has been consistently late filing the required reports to the agencies for both of her unsuccessful campaigns for Secretary of State in 2010 and senate in 2012. She also seems to assume that her runs for office and her spectacularly unsuccessful attempts to attack President Obama in the courts are all just one big overall campaign.

If Taitz manages her campaign finances with the same [lack of] level of care she has previously displayed  in dozens of frivolous motions in courts the FEC should have a field day. Others have raised questions about Taitz’s operation of her shadowy Defend Our Freedoms Foundations organizatio. A check of the California Secretary of State’s corporation database indicates the status as “SUSPENDED” (most likely because Taitz has failed to filed required annual reports). Taitz’s blog still prominently displays a request for donations to “Defend Our Freedoms Foundation”. That entity cannot even be found in a search of the database. Only the suspended entity “Defend Our Freedoms” can be found.

Taitz made at least one mention of the contribution in question on her blog in this posting on June 6, 2012:

Thank you Mr. and Mrs. Ladian [sic] and Mr. Schmidt for your generous combined donation to KFI of $7,500 to promote my candidacy. unfortunately, sladerous [sic]remarks by host John kobylt [sic] destroyed all value in these donations and caused damage

From this one may infer that the donations paid for commercials on radio station KFI in Los Angeles. At the time of the posting Mrs. Ladien had been deceased almost four months.

Whether Orly knew that the contribution on May 27, 2012 was from a deceased person is something the FEC will have to sort out. As is the case with following of Taitz’s follies, better break out lots of popcorn. 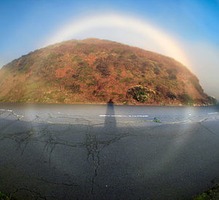 Wikipedia: A fog bow is a similar phenomenon to a rainbow, however, as its name suggests, it appears as a bow in fog rather than rain. →