Could it be? An honest Birther? By chance I recently viewed a video made by Albert Renshaw four years ago after the release of the President’s long form birth certificate. You may recall that Renshaw was the 16 year old who made a video showing that when the LFBC PDF file posted at the White House web site was opened in Adobe Illustrator it had layers and also had duplicated characters. The video went viral and has gathered over 1,500,000 views to date.

Renshaw’s analysis and other similar analyses performed by self proclaimed amateur experts using Illustrator were used by Sheriff Joe Apraio’s Cold Case Posse led by Mike Zullo to form the basis for a claim that the President’s long form birth certificate released on April 27, 2011 was a forgery.

As we now know the layers were the result of the equipment and software used to scan the certified copy of the Obama birth certificate to generate the highly compressed PDF file that was posted for public viewing and downloading at the WhiteHouse.gov web site after the April 2011 press conference.

Now Renshaw, who is 21 now realizes his analysis was wrong. He has added the following note on the video: 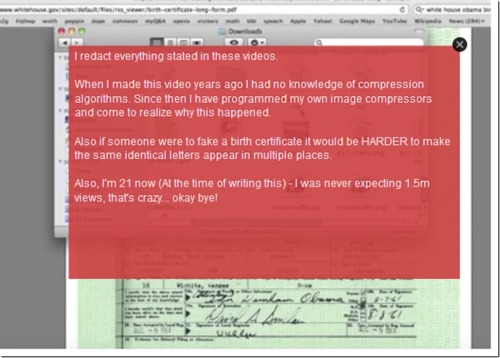 While Renshaw wrote “redact” it is clear that he meant “retract”. I would speculate that one reason Renshaw saw the light is that I and some other commenters made him aware of the results of the Xerox investigation that blogger NBC and others including me conducted. Earlier John Woodman had addressed the problems with Renshaw’s flawed analysis in his excellent series of videos and in his book Is Barack Obama’s Birth Certificate a Fraud?

It’s nice to see that the young Mr. Renshaw has grown up and has seen that he made an error. It takes character to admit you were wrong. I think he should do a little more than just leave the videos up with a small note at the beginning of one video. A good start would be to apologize to the President and his staff.

Now we await the other self proclaimed experts to follow suit and admit they were wrong? Are you listening Mara Zebest? What about Karl Denninger? Garett Papit? Mike Zullo? Time to man up!