On December 15, 2016 only two weeks before he left office Maricopa County Sheriff Joseph Arpaio hosted a third and final press conference to present the final results of the 64 month long investigation conducted by his volunteer Cold Case Posse lead by Mike Zullo. At the press conference (if you could call it that since no questions were allowed) Arpaio repeated his claim that President Obama’s long form birth certificate was a forgery. Arpaio also repeated his dubious claim that the purpose of the investigation had always been to “clear President Obama”. Cold Case Posse lead Mike Zullo conducted the rest of the presentation. During the  presentation Zullo introduced a brand new theory that the Obama long form birth certificate had been forged by using various parts of another Hawaii birth certificate belonging to Ms. Johanna Ah’Nee (now Johanna Randolph). A video produced by Birther Mark Gillar was offered as evidence to support this theory.

Zullo at the news conference and in a subsequent interview on the Hagmann and Hagmann Report radio program appeared to abandon prior claims made at the first two news conferences from 2012 that the layers in the PDF file were proof of forgery. As a matter of fact he conceded that their own tests showed that a Xerox WorkCentre could have produced the layers. He mentioned that an Italian forensic laboratory had concluded that the Obama BC PDF was generated on the type of Xerox that was used to scan the Obama tax returns in 2011.

This video was played a the December 15 news conference. It was produced and narrated by Birther Mark Gillar who has done all the previous videos for the Cold Case Posse in the birth certificate investigation.

The video claims to demonstrate nine points of forgery, namely that nine elements in the Obama BC were lifted from the Ah’Nee BC and used to make the Obama BC. First let’s look at the big picture. Zullo never says who created the so called forgery but it would have to have been someone who had access to the Ah’Nee certificate either from the archives in Hawaii or from Ms. Randolph herself. The authorized officials in Hawaii would of course have access to the archives containing all birth certificates. So if someone in the Hawaii Department of Health was the creator then out of all the thousands of 1961 birth certificates to use we the one they picked happened to be the same certificate that Ms Randolph happened to give to Miki Booth who then gave to Jerome Corsi that ultimately ended up in the hands of the Cold Case Posse in 2012. What are the chances of that happening? Why would the forger choose a certificate from a baby girl born over two weeks later? There were births in the same hospital the same day. Why not use one of those?

The only other possibility is that Ms Randolph herself was involved. We know she got her certificate in 1995 from the date seal on the back of the certificate. Although some Birthers like Douglas Vogt have made this claim Zullo doesn’t. If Johanna Randolph were involved in a conspiracy to help Obama why would she give her certificate to Birther Miki Booth where it eventually would wind up into the hands of someone trying to catch Obama in a crime?

Who was involved? How did they do it? These are the questions that real law enforcement investigators would have answered before stating a crime had been committed. This is why the CCP won’t take their findings to the Maricopa Country Attorney or any other law enforcement organization.

Did I say the theory is stupid? But wait there is more…

Let’s look at an overlay of the two certificates. It was one prepared by Doug Vogt earlier this year and shared with me by someone else.It was also previously published at the Obama Conspiracy Theories blog.  I was told that an overlay almost identical to this was prepared for the Cold Case Posse in 2012. (Click the image to view a full size version.) 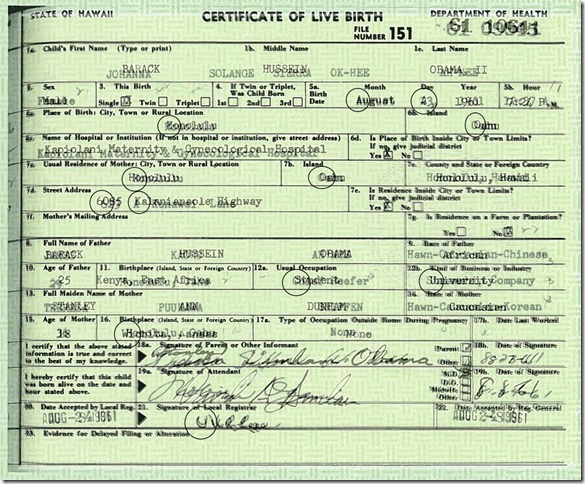 I don’t know how anyone could reasonably conclude that one certificate was used to make the other. What we can conclude is that the typist used a similar or the same typewriter with tabs stops set to center the entries in the fields. This would make sense since the same person in the same office probably prepared birth certificates at Kapi’olani Hospital in 1961.

Note in box 6b, which is one of the five elements that Gillar claimed were copied over together from the Ah’Nee certificate. You can see in this overlay they aren’t the same. Kevin Davidson at Obama Conspiracy Theories also pointed out that even in the fuzzy video you could see this wasn’t the case:

You can clearly see the “Oahu” in the Obama certificate on the left has a vertically displaced upper case “O”. Anyone who has ever typed on a typewriter knows how that happens.

Kevin used the better images available to show the differences even more dramatically:

So right away we can see that the CCP theory falls short on the first claim.

Kevin Davidson also published an analysis by an anonymous commenter who looked at the so called nine points of forgery. (Click on the picture for a full sized image).

This author also examined the claim that the date stamps were copied over because they were the placed at same angles on each certificate. First Gillar leaves out one small fact in the video. The dates aren’t the same! Let me repeat that. They are claiming someone copied over the dates and had to carefully change the day of the month but didn’t bother to change the angle. There is also the issue that there is no evidence that the PDF was ever touched by Photoshop or any other photo editing software. Again click on the image for the full sized version.

While the angles are close they are not the same. Also, trying to determine precise angles on fuzzy, pixelated images is just guesswork. We have run into this kind of flawed analysis before with Paul Irey.

So one has to ask. Why would the Cold Case Posse come out with such an easily debunked new theory after 64 months of the investigation? I think the answer is obvious. This investigation had been run using the name and prestige of Sheriff Joe Arpaio. Arpaio lost his bid for reelection in November. The newly elected Maricopa County Sheriff Paul Penzone is on record as saying the birth certificate investigation will end when he takes office. Mike Zullo admitted on Mike Volin’s WOBC radio show the other night that the investigation had ended as far as the sheriff’s office was concerned.

Therefore the Cold Case Posse was desperate to put out something and claim victory. Their earlier evidence had been ripped to shreds. The layers were explained by the Xerox WorkCentre experiments. Zullo had been caught using the wrong race codes in an earlier Gillar video. The Selective Service application card was a sideshow from the start and went no where. After all, the Selective Service registration card was obtained from the Bush administration in October 2008 even before Barack Obama took office.

Also, Zullo had gotten sidetracked for almost two years by conman Dennis Montgomery chasing imaginary conspiracies involving federal Judge Murray Snow and  members of the Department of Justice.  Zullo had to invoke the Fifth Amendment hundreds of times when he testified before Judge Snow in the Melendres v Arpaio racial profiling case. The big March 2014 reveal of Universe Shattering Evidence had to be postponed indefinitely. With only two weeks to go in Arpaio’s term and President Obama leaving office in a month the Ah’Nee certificate was all that was left.

The latest nonsense from the Cold Case Posse is what you would expect when someone is desperate and is trying to promote a falsehood.