Petition to Explain Why President Donald J. Trump Is Such a Needy Little Bitch Is Trouncing Lakin Petition

A petition that asks the White House to explain why President Donald Trump is such a needy little bitch is gathering signatures at a rate more than double that of the petition to pardon Terry Lakin. I don’t plan to go into a detailed analysis of why this is so but it does send a very loud and clear message. 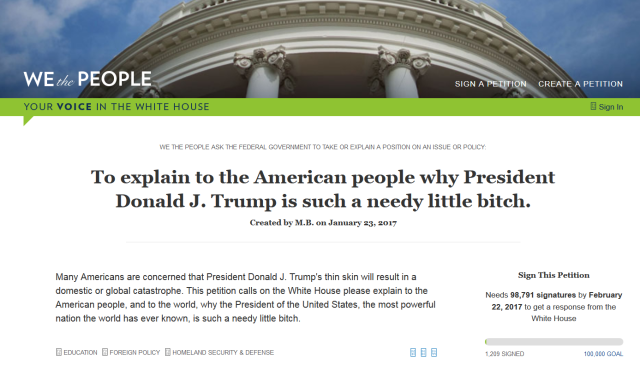 As of this morning the Lakin petition has 839 signatures and the Needy Little Bitch stands at 1987. The Lakin petition was started two days earlier on January 21 and is already half way through the 30 day period it has to gather 100,000 signatures. For those readers who are math challenged that is 0.8% of the goal necessary to obtain a response.

Updated 2/2/2017: While the Lakin petition will probably hit 1000 today the Needy Little Bitch petition will top 6000. The trouncing is getting even worse.

[Updated 2/12/2017] The thin skinned weenies at the Trump White House pulled the petition on Tuesday as it had passed over 6000 signatures. The stated reason was for terms of service violations. Meanwhile the Lakin petition has gained a little steam but is still only at 4000. It stands no chance of gaining the 100,000 signatures needed to merit an answer. For comparison a petition asking for the release of Donald Trump’s tax returns has gathered 651,000 signatures.

1 Response to Petition to Explain Why President Donald J. Trump Is Such a Needy Little Bitch Is Trouncing Lakin Petition