In the first part of this series I wrote about the beginning of the Post & Email and its mysterious founder John Bugnolo (aka John Charlton). After a mere six months Bugnolo turned the control of the Post & Email blog over to a resident of Stafford Springs, CT named Sharon Rondeau.

Rondeau apparently had been involved early on with the P&E. She authored articles as early as the fall of 2009 when Charlton was still running things. As I wrote in Part 1 she was listed as an officer on corporation documents filed in Wyoming beginning in March 2010 when Bugnolo was still the owner.  After Bugnolo was removed as the owner Sharon’s husband Gerard was added as an officer of the Post & Email. I have never seen any articles Gerard authored on the blog.

She tells us a bit about her background on the About Us page at the P&E:

Her ten-year career at a Hartford, CT insurance company ended abruptly in February 2001 after she was permanently injured from a rear-end car accident.

As The Post & Email’s editor, Ms. Rondeau writes daily reports focusing on government corruption; reviews and publishes editorials from syndicated and guest writers; and screens citizen submissions for quality, accuracy, and adherence to the high standards of the newspaper.

Sharon is also an accomplished harpist with more than 28 years of experience performing in a wide variety of venues including solo, small ensemble and orchestral.  In 1998 she released her CD, “Celtic Reflections,” and in 2009, her collection “Easy Scottish Harp Music” was published by Mel Bay.

*[Both Charlton and Rondeau seem to think it is important to say they are natural born citizens as if that somehow makes them better than other people. It’s possible that Sharon added this to Bugnolo-Charlton’s biography on her own.]

I looked into Mrs. Rondeau’s background to attempt to find any connection with John Bugnolo (Charlton). Neither Charlton nor Rondeau showed up on Birther websites before the Post & Email WordPress blog began.

I found that Sharon Rondeau was born in Massachusetts. She is a very accomplished musician. She was a professional harpist for years. She comes from a family with a strong music background. She was one of four daughters of the late Edward and Pearl Hanjian. Edward “Coach” Hanjian was a music director for several years at Fitchburg, MA High School and took the marching band to the Tournament of Roses Parade in 1962 . It was the first high school from Massachusetts ever to march in that event. Mr. Hanjian was a decorated veteran from  World War II and served in the Army Air Corps. In 1962 he moved his family to take a similar position as band director at Conrad High School in West Hartford. CT. He worked there for 25 years until retirement in 1987. Mr. Hanjian passed away in 2011. Pearl Hanjian lived another five years and passed away last year. Fitchburg is near Westminster, MA where Bugnolo lives but Sharon would have been quite young when her family moved to Connecticut.

Ms. Rondeau has two sisters who have had noteworthy careers in music. Her sister Susan Hanjian also lives in Connecticut and was named the music educator of the year in the state in 2016. Her older sister Marcia Hanjian plays the viola and is an instructor for both viola and violin. She has played in several orchestras in Connecticut and even toured internationally with orchestras.

The point for bringing up Sharon’s family is to note that she comes from a talented, well educated family and that makes it even more bizarre that she became a Birther and conservative rabble rouser taking on the causes of truly strange characters like LCDR Walter Fitzpatrick in Tennessee. I looked at her sister Susan’s social media pages and let’s just say she is pretty far away from Sharon’s political views. Another sister is registered with the Democratic party.

The extent of Sharon’s disability is not known. The disability apparently was not severe enough to interrupt Rondeau’s career as a harpist. She played harp professionally from the time of her accident in 2001 until recently. I recall several years ago talking with a harpist who played at a Christmas party to which I was invited. After the party I marveled at how this small lady was able to crate up the harp and roll it out to her van. I had offered to help but she said she had a system and had done it many times. I can’t imagine what an effort it took for a disabled person to do that.

[Update: A reader pointed out that Rondeau has a YouTube channel that that has several videos of her playing the harp. For example:

Her disability is not readily apparent in this video nor any of the ones on her channel that I watched. (By the way, what’s with the wires sticking out of the electrical box in the ceiling?)]

She apparently has a disabled family member living at home, possibly an adult child who receives government benefits including SNAP payments (Supplemental Nutrition Assistance Program or the the program formerly known as Food Stamps). That leads me to…

In October 2013 Rondeau posted the following article during the time Republicans caused a government shutdown by refusing to raise the debt limit:

Rondeau’s article was odd for several reasons. First, why did an arch-conservative like Rondeau care about people receiving “food stamps” enough to write a full article about it? Of course she never passed up an opportunity to include a snide remark or two about President Obama:

Obama’s approach to poverty has been to “redistribute the wealth” and raise the national minimum wage, invest more money in public education, and repair “crumbling infrastructure.”

Obama’s political leanings really had nothing to do with the point of the article but sometimes Rondeau can’t help herself. She continued:

A SNAP recipient in Connecticut received the following letter explaining the reduction in benefits for November 1: 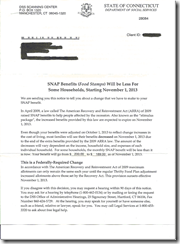 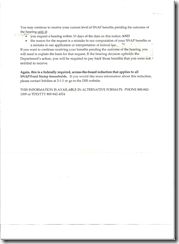 Sharon’s concern for this Connecticut SNAP recipient’s plight was quite touching. The state sent the letter to inform the recipient that their monthly benefit was being reduced because a temporary increase that had been part of Obama’s American Recovery and Reinvestment Act of 2009 was ending soon. I make two points. First, this is typical for what passes for news at the P&E. Second, it is always Obama’s fault at the P&E.

From: Bill Bryan
Subject: We published that you’re the Food Stamp Birther Blogger

Message Body:
Such an honest newspaperwoman! When you wrote: “A SNAP recipient in Connecticut received the following letter explaining the reduction in benefits for November 1″ you forgot to redact the bar code above the address, which is rather easily decoded. The address is:

That’s your address, sweetie. You’re calling President Obama “the Food Stamp President”? Then that makes you “The Food Stamp Birther Blogger”.
And it means that YOU were the subject of part of one of your “newspaper” stories without disclosing it. Got journalistic ethics? (No, you don’t.)
For now, we’re not publishing the foreclosure, though it’s public record.
http://img546.imageshack.us/img546/5245/rondeauy.png
On the bright side, we’re publishing the truth about you, while you continue to publish nothing but lies about me.
–
This mail is sent via contact form on The Post & Email http://www.thepostemail.com

Foggy’s email prompted a response in the form of an article in which she acknowledged that was her address but she claimed she wasn’t the SNAP recipient:

Bryan is apparently responding to the article published on October 16, 2013 regarding whether or not the SNAP program would be in operation on November 1 had the government shutdown continued through that date.
**
Bryan’s reasoning and conclusion about the recipient of food stamps at the address is faulty. Sharon Rondeau is not a recipient of any government benefits, but there is a disabled family member who is.
Bryan is correct that the property is in foreclosure. This writer is not embarrassed to say so, nor will she be blackmailed over it.

I am not sure how Bryan’s letter could be interpreted as blackmail. What he said was true and Rondeau was guilty of poor journalism by failing to identify that the letter was addressed to a family member. She justified this by claiming she was not the actual recipient. However, she was benefiting directly from the SNAP program because the family member is a dependent. She was on the receiving end of what she described as President Obama’s “redistributing the wealth.” That is a serious omission from the article.

Butterfly Bilderberg, a member at the Fogbow, wrote this cordial open letter to Sharon Rondeau. To my knowledge she never responded:

I enjoy the good fortune of coming from a loving and financially secure family, from parents who taught me empathy and passed to me and my brothers the spirit of noblesse oblige. I was blessed, genetically, with an intellect that my parents nurtured and shaped, and I was able to use it to propel myself into a career that has always provided for me and my children, and then some.

Every year since I joined the workforce when I was 22 years old I have been able to share my earnings with those who need a hand up the economic ladder, both through my tax dollars and charitable giving. I can honestly say that I have never resented paying taxes, or that my taxes provide a safety net (as fragile as it is) for those who need it. I feel truly honored that I can assist others. That includes you and your family. That is what we, as a society, do — we take care of one another. If that makes me a “progressive” — a term that you use derogatively — then I proudly wear that label.

You can be grateful that you live in a society where others gladly contribute to the less fortunate. Or you can be bitter. Your choice. I know which one I choose.

Merry Christmas and here’s hoping that you continue to share in the bounty in the coming new year.

I will end this article by saying a few complimentary things about Sharon Rondeau. I think she is a passionate blogger and has a right to write whatever she wants and hold the beliefs she wants. I thinks she is one of the more articulate Birthers I have heard on Birther radio programs. She has on a few occasions corrected obvious misstatements when they were pointed out to her. She has let through some critical comments although her moderation of comments isn’t even handed and she let’s Birthers get away with saying vile racist things. It’s too bad that someone who grew up in an apparently wonderful family and had parents who provided her with a good education decided to buy in to the Republican hate memes and become an eternal advocate of the racist Birther movement.

Next time in Part 3 I will introduce some of the odd characters whom Sharon supports and who occasionally write guest posts at the P&E.

You can read Part 1 in this series here.