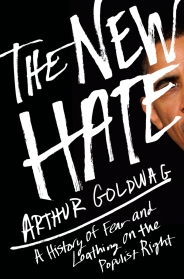 My guest on the Tuesday March 20th Reality Check Radio program will be Arthur Goldwag, author of a several of popular books on conspiracy theories. His latest work, published by Pantheon books, is The New Hate: A History of Fear and Loathing on the Populist Right. Here is the description of the book from Amazon:

From “Birthers” who claim that Barack Obama was not born in the United States to counter-jihadists who believe that the Constitution is in imminent danger of being replaced with Sharia law, conspiratorial beliefs have become an increasingly common feature of our public discourse. In this deeply researched, fascinating exploration of the ideas and rhetoric that have animated extreme, mostly right-wing movements throughout American history, Arthur Goldwag reveals the disturbing pattern of fear-mongering and demagoguery that runs through the American grain.

The New Hate takes readers on a surprising, often shocking, sometimes bizarrely amusing tour through the swamps of nativism, racism, and paranoid speculations about money that have long thrived on the American fringe. Goldwag shows us the parallels between the hysteria about the Illuminati that wracked the new American Republic in the 1790s and the McCarthyism that roiled the 1950s, and he discusses the similarities between the anti–New Deal forces of the 1930s and the Tea Party movement today. He traces Henry Ford’s anti-Semitism and the John Birch Society’s “Insiders” back to the notorious Protocols of the Elders of Zion, and he relates white supremacist nightmares about racial pollution to nineteenth-century fears of papal plots.

Other books published by Mr. Goldwag include:

Thanks very much to Mr. Goldwag for his time. He stayed for the entire two hours. You can listen here: