In Part I in this series I covered how we came to conclude that a Xerox WorkCentre was the probable original source of the PDF image of President Obama’s long form birth certificate posted at the Whitehouse.gov web site on April 27, 2011. In Part II I reviewed the results of early tests that solidly confirmed the theory that a a Xerox WorkCentre with MRC compression and the scan to email feature was responsible for creating the PDF in question. That lead us to perform tests on a replica of the long form birth certificate printed on an actual sheet of green basket-weave security paper similar to what the Hawaii Department of Health used when they printed two certified copies requested by President Obama through his attorney in April 2011.

In this article I will review the results of testing that I recently performed using a Xerox WorkCentre Model 7535. Why did I choose that model? Well, the answer is easy. It was the one to which I had access. Besides, the actual model doesn’t really matter. If I can show that any model (or make for that matter) multipurpose office machine will generate the same features that are present in the WH LFBC PDF then that is all I need to do.

There is pretty good evidence that a Xerox 7655 was use by the White House but it isn’t definitive. We know a WorkCentre 7655 was the creator on the President and First Ladies income tax return PDF’s s that were posted just a few days before the release if the LFBC. We also know from government records that Xerox has a contract to supply office equipment to the Executive Office of the President in the White House.

There is also evidence that Xerox WorkCentre 7535 uses a very similar or the same algorithm in most of its WorkCentre product line. We know this because when the issue of JBIGs compression changing numbers in some scans was discovered the list of affected machines included most of the WorkCentre product line such as the 75XX and 76XX models.

So let’s get to the results.

I ran multiple trials with the test specimen using the default settings for scanning to email as a PDF. I then opened each of these in Adobe Illustrator CS2 and examined the objects.

First let’s look at the full image of the very first scan. I used the document feeder and default settings. 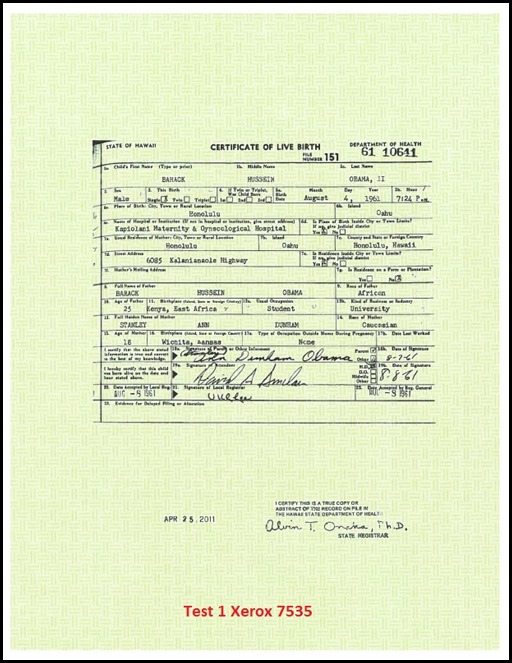 Notice that the scanning process placed a white border that was not there in the original document. What caused this border? The WH LFBC had a border but it was larger wasn’t it?

Let’s look at the WH LFBC.

Notice that the WH LFBC has a border that is about twice as wide as test scan with my test birth certificate. However, the border in the WH LFBC is caused by a top level clipping mask applied by the Apple Preview software in which it was last saved. Fortunately, easily release the clipping mask in Illustrator and see the what the original scan. How do I know that? I will cover that in detail in Part IV.

Here is what the WH LFBC looks like when the Preview applied clipping mask is released:

Notice that when the clipping mask is released it reveals a white border similar in size to the one on the 7535 test specimen.

Let’s look at the “real” borders on both documents. In Illustrator we can zoom in and measure the width of the borders. 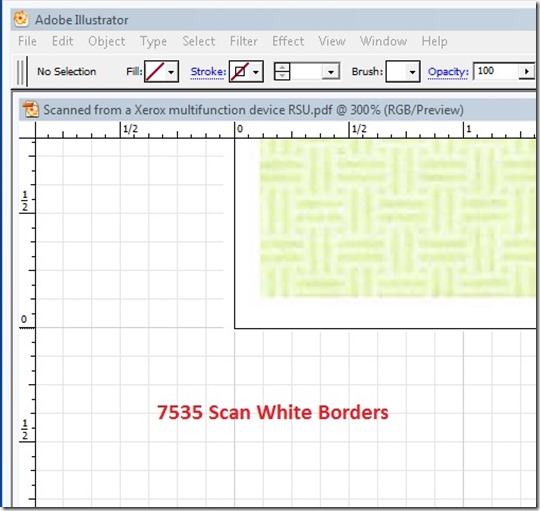 As you can see once the Preview clipping mask is released the two white borders are identical. They are approximately 1/8” on each side. What causes these borders?

To answer this question we need to look at the settings on the Xerox WorkCentre. Xerox has a feature called Edge Erase. The Edge Erase feature is turned on by default on the WorkCentre’s. The purpose of the feature is to remove the shadow caused by the edge of the paper. It can also be used to remover staple holes and punched holes from images. The default setting on both the WorkCentre 7655 and 7535 is 0.1”. I have tested several documents scanned on the 7535 and in Illustrator the borders applied by Edge Erase actually measure closer to 1/8”. I do not have an explanation for the slight difference but it is consistent.

The fact the the WH LFBC has a “real” white border (not the clipping mask) is solid evidence that the border was applied during a scan on another device. It also happens to be identical to the white border applied by a Xerox WorkCentre using default settings.

Now let’s compare the layers (really objects) in the test scan on the WorkCentre 7535 with the White House LFBC PDF. First, I do not claim that my test BC is identical to the WH LFBC. The security paper appears to be a little lighter shade of green. Also I was also working with a photo provided by the AP so  there is no way that subtle differences in tints of the text and form or the same resolution of the elements could be maintained. The purpose is to show that a similar algorithm created the layers as opposed to a human forger.

As it happened my very first scan of the test BC on the 7535 generated exactly nine layers! I believe this was luck more than anything else as I will demonstrate in the next article.

First, I have some general comments on the layers. A pattern emerged during during the scanning of this test BC and scans of printouts of the test BC. The same basic layers could always be found:

So here are side by side comparisons of the main layers in the WH LFBC vs. my test BC:

You can see the remarkable similarity in the content of these layers. The remaining layers are various bits of text and random dots. Also notice the white “holes” in the background layer. The CCP stated categorically that MRC compression would not do that in the “Media Supplemental Report” prepared by Garrett Papit. Papit said that MRC compression could not cause the white holes under the date stamp. Here was their attempt to show the effect of MRC compression:

While on the 7535 scan we can clear see the “holes” left by MRC compression:

You can see that Garrett Papit’s claim that MRC compression will not leave white “holes” is not correct. That is clearly what occurs on the WorkCentre.

Another claim made by the CCP “experts” Mara Zebest and Garrett Papit is that no compression algorithm will cause halos around the letters. Of course the photo above alone demonstrates that is not the case.  Let’s look at another example. 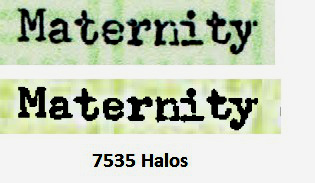 Notice how the green background disappears between the letters when the original is compared with the scanned document. We have halos.

Let’s review the findings. I have demonstrated that by scanning a close replica of the Obama LFBC on a Xerox WorkCentre that it will generate a PDF that contains the same so-called anomalies. The WorkCentre creates an identical white border. It creates nine layers. It creates layers nearly identical to the WH LFBC PDF. It creates white holes. It creates halos.

In Part IV I will discuss OSx Preview, the clipping mask and directly refute the Birther “experts” claims one by one.